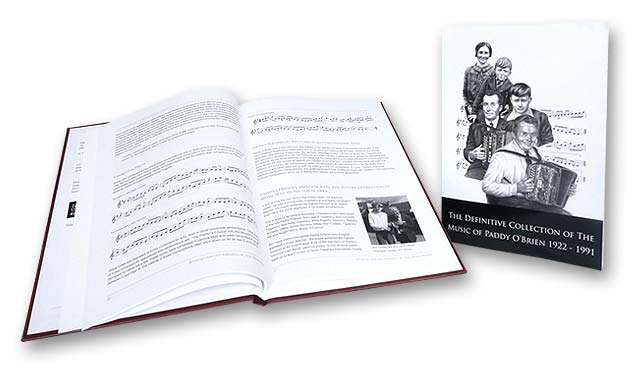 Paddy composed over one hundred tunes during his lifetime. A selection of his compositions was published in a book entitled “The Compositions of Paddy O’Brien.” which I compiled and edited in 1992.

I am delighted that the full collection is now completed in this publication. Paddy’s compositions cover all of the main dance music genre. He composed reels, double jigs, slip jigs, single jigs, hornpipes, polkas, and marches. There were three stages in Paddy’s life where he composed music. The first stage was in the late 1940’s and early 1950’s when he composed “Cooley’s Hornpipe” and “Dinny O’Brien’s Reel.” The next period of compositional output by Paddy was on his return to Ireland during the mid to late sixties. During this period he composed the jigs “The Boys of Lough Gowna” and ”The New House.” Paddy Ryan from Coolbawn in Co. Tipperary won the All-Ireland in 1965 playing these tunes. Paddy refers to a visit he paid to Paddy O’Brien prior to competing in the competition. During this visit Paddy gave these new compositions to Paddy Ryan and the end result was that Paddy Ryan was successful in achieving first place in the competition.

Shortly after this in the early 1970’s he composed the tunes that were included in the recording “The Banks of the Shannon.” The most prolific period of composition in Paddy’s life occurred between the late 1970’ until his death in 1991. During this period, Paddy composed most of the significant collection that is contained in this book. These compositions are now played by musicians all over the world. There are many compositions in this publication that have never been published or even heard before. I am delighted that they are eventually reaching publication and will now enter into the music tradition like the rest of his compositions. I know that these new tunes will be embraced by musicians and accepted into the traditional repertoire as were his previous compositions that have already been published.

The Compositions of Paddy O’Brien 1922 – 1991 has been kindly supported by Irish World Academy of Music and Dance, University of Limerick