Launched at the Willie Clancy Summer School, 2012, Aon le h’Aon is a CD featuring a collection of compositions from the ‘Definitive Collection of the Music of Paddy O’Brien 1922-199’ played on fiddle by Eileen O’Brien. 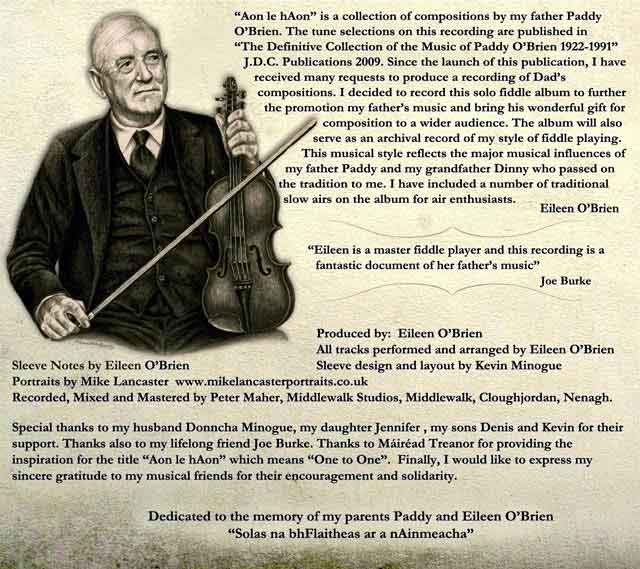 “Aon le hAon” is a collection of compositions by my father Paddy O’Brien. The tune selections in this recording are contained in my publication “The Definitive Collection of the Music of Paddy O’Brien 1922-1991”, J.D.C. Publications 2009. Since the launch of this publication, I have received many requests to produce a recording of Dad’s compositions. I decided to record this solo fiddle album to further the promotion my father’s music and bring his wonderful gift for composition to a wider audience. The album will also serve as an archival record of my style of fiddle playing. This musical style reflects the major musical influences of my father Paddy and my grandfather Dinny who passed on the tradition to me. I have included a number of traditional slow airs on the album for air enthusiasts. I would like to thank North Tipperary Co. Council and particularly Arts Officer Melanie Scott, for the wonderful support and encouragement afforded to me. This assistance has enabled me to bring this recording project to completion. Eileen O’Brien

“Eileen is a master fiddle player and this recording is a fantastic document of her father’s music”, Joe Burke

Special thanks to my husband Donncha Minogue, my daughter Jennifer , my sons Denis and Kevin for their support. Thanks also to my lifelong friend Joe Burke. Special thanks to Máiréad Treanor for providing the inspiration for the title “Aon le hAon” which means “One to One”. Finally, I would like to express my sincere gratitude to my musical friends for their encouragement and solidarity. 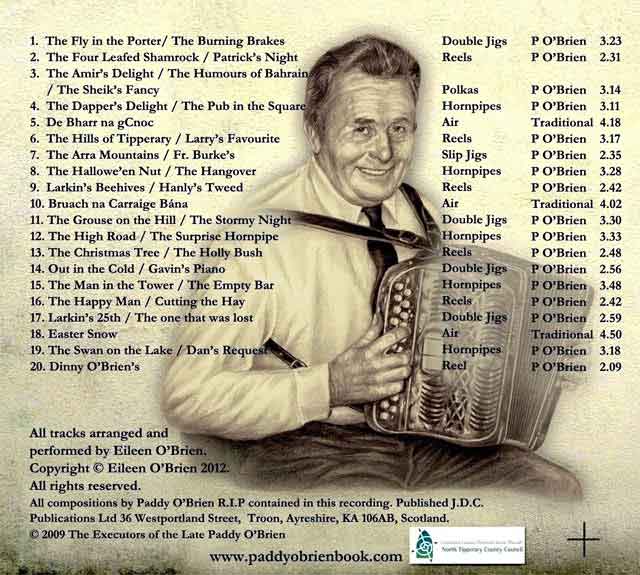 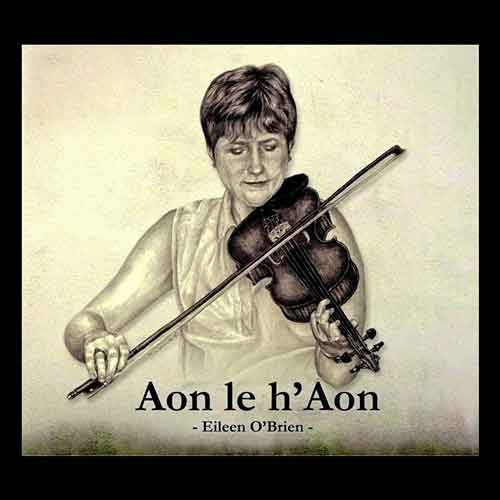 When Eileen O’Brien first published a volume of her late father, Paddy O’Brien’s compositions, she began to receive requests to record an album of her father’s work.

Following from the release of The Definitive Collection of the Music of Paddy O’Brien 1922–1991, the Tipperary fiddle player decided to record a collection of Paddy’s tunes and the result is the gem Aon le h’Aon.

These compositions are timeless and Eileen herself perpetuates the style and the phrasing of her father who, as well as his tunes becoming an integral part of Irish Traditional music, was credited with the emergence of the B/C style of button accordion playing that we know so well today.

Eileen takes us through well administered double jigs The Fly in the Porter and The Burning Brakes before treating the listener to a wander through polkas, reels, slip jigs and a fantastic hornpipe display with The High Road into The Surprise Hornpipe which truly showcases that distinctive North Tipperary style of structured enunciation in which every note plays its part.

The album ends on a high note with Dinny O’Brien’s named for her grandfather; another great influence of musicality in the Irish tradition.

Aon le h’Aon is an archival reference library within itself and a valuable resource for any collector of tunes and in Eileen’s touch of the bow to the strings, the inimitable O’Brien legacy most definitely remains firmly ensconced deep within the tradition.

Launched at the Willie Clancy Summer School, 2012, Aon le h’Aon is a CD featuring a collection of compositions from the ‘Definitive Collection of the Music of Paddy O’Brien 1922-1991 played on fiddle by Eileen O’Brien.