Eileen comes from a family background that is steeped in the Irish tradition. Her father Paddy was instrumental in establishing the B/C style of button accordion playing as we know it today. Paddy was also one of the most prolific composers of traditional music. Dinny O’Brien, (Eileen’s grandfather) played fiddle and concertina and was a highly influential figure in Irish traditional music. He was the leader of the “Bridge Ceili Band” in the 1950’s and 60’s.

Eileen’s late mother was a member of the Seery family from Milltown, Rathconrath, Mullingar. Her mother Eileen Seery was a noted singer in her day. Eileen’s uncle, Sean Seery (piper) and grandfather Jim Seery (fiddle player) were both founder members of Comhaltas Ceoltoiri Eireann. 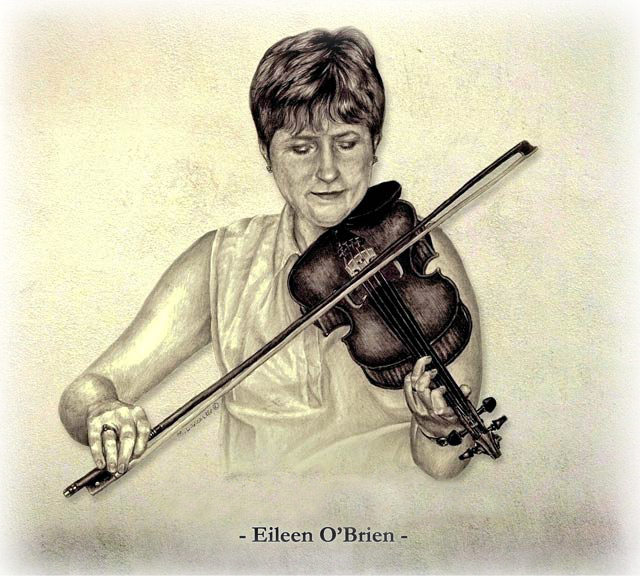 Eileen is an All-Ireland champion in both senior fiddle and senior fiddle slow airs. She is also a composer and some of her compositions have been recorded by the artists Matt Molloy, John Carty, The Kane Sisters, Paddy Carty & Conor Tully.

Eileen has performed and given masterclasses and lectures in many countries, U.S.A Europe, China, Russia, Australia and New Zealand. She is a highly respected teacher and has influenced many aspiring fiddle players.

Eileen has recorded three solo albums to date, “Newtown Bridge” (1999), “The Fiddler’s Choice” (2005) and “Aon le hAon” (2012). As a member of “The Boruma Trio” Eileen recorded the album “Gléas” with Andrew MacNamara and Dr Geraldine Cotter. This album focused on the nuances and contrasts between the East Clare and North Tipperary musical tradition. She has produced two books of music, “The Compositions of Paddy O’Brien” (1991) and “The Definitive Collection of the Music of Paddy O’Brien” (2009) both published by J.D.C.Publications, Troon, Ayreshire, Scotland.